For many applications, the use of a metal hose or expansion joint is required. Without these devices, the stresses of constant movement during temperature changes or vibration could result in significant consequences for the surrounding infrastructure and components. When tasked with determining which component to use for a particular application, there are several criteria that can provide insight into when to use an expansion joint instead of a hose.

To safely determine when a particular application requires the use of an expansion joint, it is important to understand not only when an expansion joint is the best option, but also how the expansion joint functions, its accessories, as well as the testing it undergoes to ensure that it will be a reliable component.

An expansion joint is a device that enables pipes to expand and contract without putting stress on the surrounding equipment. One of the most common criteria used to determine if it is the most suitable equipment for an application, is the required axial movement.

Unlike metal hoses, which are not designed for axial movement, expansion joints are excellent at absorbing the compression and extension of the bellows along a single axis; this remains true whether the component is installed horizontally or vertically. This kind of movement is typically associated with thermal growth and contraction; it is found in piping and ducting systems across a wide range of industries, see Figure 2.

Applications that undergo vibration dampening, such as exhaust systems and piping systems that use pumps, are similarly often better equipped to handle the wide range of axially, laterally, or angular movement if an expansion joint is employed. Their ability to absorb vibrations mitigates the risk of stressing the piping systems.

Other primary criteria considered for component selection includes the requirement for exotic materials on specific applications and space allowances. Although hoses can be made of several different materials, certain alloys, like 800H, Nickel 200, Titanium Grades 1 and 2, and Duplex 2205, may be desired for extremely hot or highly corrosive applications. As these are not readily available for metal hoses, the expansion joint becomes the only option. Expansion joints may also be ultimately selected based simply on the fact that they take up less space than a hose. If a connection is required in a tight setting, or if the diameter required lies outside of the typical range of hose sizes, expansion joints may be the most viable option.

Critical aspects to consider when choosing expansion joints are:

• Ease of fabrication needed at plant site if necessary.

• Availability of space required around the item being supported.

• Clearance requirements below the surface where support will occur, so the selected product does not interfere with others. 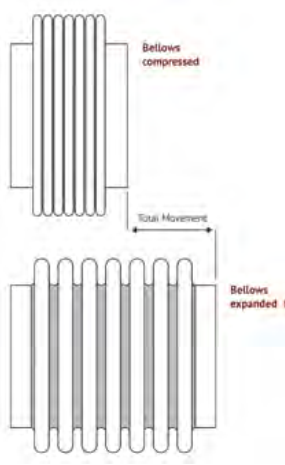 The advantages of selecting this component can including noise reduction, misalignment compensation, and thermal expansion in hot applications. Specialized expansion joints can be designed for different types of movement, such as small vs. large angles, or translation along precise paths (such as linear slides).

Typically, expansion joints consist of metal pipes with rubber liners and an internal braided wire reinforcement which allows them to be flexible. This flexibility prevents them from breaking apart when stressed by moving objects within a system. They work by compressing when they get hot, which relieves pressure and stress from the pipe’s walls, preventing mechanical damage. More specifically, an expansion joint consists of:

Once a type of expansion joint has been selected for an application, it is important to ensure that it will meet the necessary specifications to handle the demands of not only the conveyed media, but that it will be suitable to its environment. To ensure this, a variety of test can be performed on the bellows.

The bellow is the flexible part of the expansion joint. It must be durable circumferentially to withstand the pressure and flexible longitudinally to accept the deflections for which it was designed. The flexibility strength with is a unique design problem that is not often found in other components of industrial equipment. The advantage of oversized bellows include:

• Permit use of internal sleeve for joint moving laterally or angularly without reducing inside diameter.

• Used in conjunction with an internal sleeve to reduce bellows temperature in very high-temperature service.

Internal liners are necessary when particulate barriers and purges are specified, and are used to reduce turbulence across the bellows, and protect the bellows from erosion. They are normally required when ducts are refractorily lined, as they become refractory lined as well. Flow direction should be specified on expansion joints with combination ends.

External covers are recommended to protect the bellows from mechanical damage. Covers may be provided in removable and non-removable configurations. The advantages of covers include:

• Protect bellows against mechanical damage during installation and in-service.

• Serve as support for external insulation.

In systems that have a media with significant particulate content (i.e., flash or catalyst), a barrier of ceramic fiber can be utilized to prevent corrosion and restrict bellows flexibility resulting from accumulation. Purging systems may also be used to perform this function. Liners are installed when a particulate barrier or purge connection is specified. If used in conjunction with an internal sleeve the advantages include:

• Prevent packing, ‘coking’, of solids between internal sleeve and bellows.

Rectangular expansion joints may come equipped with hinges or tie rods that can be used to control movement, restrain pressure thrust, or support external loads. This hardware may be installed internally or externally. Advantages of tie rods include:

• Prevent application of pressure thrust to piping or equipment when expansion joint is used for lateral deflection and/or angular rotation.

• Used as limit rods on expansion joints for axial movement. Limit over-extension of joint and damage to piping or equipment if anchor fails.

• Used as control rods to limit and control the movement of universal type expansion joints.

Fatigue testing is the process of verifying how many cycles the bellows can withstand before failing. The bellows are placed on a cycle-test machine and bolted to a hydraulic plunger. Each cycle is counted as the bellows are compressed and returned to neutral.

Liquid dye and a white powder observant can be used to locate leaks or cracks in the bellows attachment welds. This test is performed for long seam welds before and after forming the bellows.

This test is used to detect leaks by sealing expansion joints, pulling a vacuum in the expansion joint, and spraying helium over the surface of all welds. A pump pulls any gas which leaks to the interior of the bellows to a special mass spectrometer designed to detect the helium. If helium is detected, the point of the surface where it was sprayed is marked for repair. If no leaks are found, the flow rate of helium to the mass spectrometer is measured against a standard for the material. A mass spectrometer functions by accelerating a narrow beam of a gas sample through a magnetic field. When they reach the magnetic field, the amount they are deflected depends on their charge-to-mass ratio. Helium molecules are so small, they will penetrate materials at a slow rate when the pressure difference of a full vacuum is applied.

Additional product testing types can include:

Expansion joints are a common solution for piping systems subject to vibration, misalignment, or thermal expansion. They may appear simple in design, but in fact their design is quite complex, and it has to comply with a number of tests to verify their performance under several extreme conditions. End users should carefully consider the selection of suppliers for this type of equipment, as its failure can easily lead to accidents.

Minimum Bend Radius and What it Means for Hoses

From Grey to Blue to Green: The Hydrogen Revolution

© 2021 - Hose and Coupling World - Privacy Statement
We use cookies on our website to give you the most relevant experience by remembering your preferences and repeat visits. By clicking “Accept All”, you consent to the use of ALL the cookies. However, you may visit "Cookie Settings" to provide a controlled consent.
Cookie SettingsAccept All
Manage consent