Mining is a process that cannot be made possible without water. However, extracting minerals from the depths of the earth is made more challenging as water simultaneously harms the process of extracting the resources.

During the design phase of a mine or quarry, drainage and pumping systems are therefore built to tame and control the impact of water. These systems consider seasonal floods, the amount of precipitation in a given area per year, filtration, and other properties of the mountain range. For the most part, the system consists of steel pipelines, referred to as the stationary drainage system, through which water is transported with the help of robust pumping systems. But, as the worksite is transferred, the steel pipeline needs to be dismantled and transferred to a new location. To account for this, hoses are also used in the design phases of mining or quarry plants to pump, drain, and vacuum water. Rubber and polyurethane hoses provide an alternate solution for mitigating the negative impacts of unwanted water that is becoming increasingly popular in the mining industry.

As a mining operation is taking place, hoses are used to remove and transport a mixture of water, sharp stones, earth, sand, clay and pulp away from the extraction site. They are typically made from 50mm to 400mm rubber, are reinforced with a galvanized steel spiral, and can withstand working pressure up to 10 bar. Operationally, it is advised that any hose that is 100mm, or larger, use cranes to transport it. Not only does the weight of the hose add up quickly, making them difficult to dismantle and transfer, but if the hose is not lifted correctly it can incur damage, such as a significant cracking along the spiral, which leads to hose failure. Repairing the hose can be increasingly difficult as it requires personnel to trim the damaged section with a cutting tool and replace the connecting elements. If the spiral in the hose is too thick, this process involves compression with clamps; connecting the two parts of the hose will be unsuccessful.

While rubber hoses are commonly used in mining applications, the rough rock and abrasion on the outer layer of the rubber hose has a significant impact on the hose’s integrity and ultimately shortens its life cycle. If damage to these hoses occurs, the process of replacing the damaged area is laborious and requires the involvement of qualified personnel. To address this issue, many end users have therefore turned to the use of flexible polyurethane flat-rolled hoses. 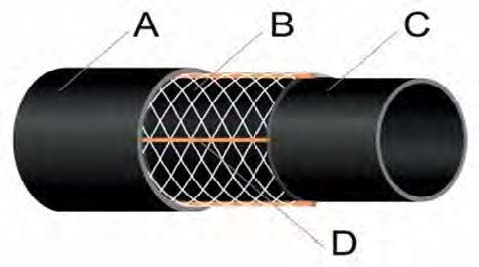 Lay-flat thermoplastic polyurethane hose technology is relatively new and becoming more widely used in the mining industry. Its manufacturing process involves an extrusion method in which molten thermoplastic polyurethane is forced through a particular mold. The inner and outer layer of the hoses are made of thermoplastic polyurethane (TPU), an abrasion-resistant material that is resilient to folds, and ultraviolet radiation. They have an inner reinforcing layer made of polyester thread with a woven copper wire to relieve static stress. Flat hoses are available in diameters that range from 25mm to 600mm with a working pressure that spans from 10 to 100 bar. The allowable amount of pressure for any given hose is directly dependent on the size or type of the hose. The larger the diameter, the less force it can withstand; however, hoses typically have a safety factor of 2:1.

One of the most significant benefits of lay-flat hoses is that the extrusion method used to create them can produce hoses without length restrictions. The longer the hose, the fewer connections it has, which means that the potential leakage of the transported product is reduced by order of magnitude. Hoses that range 50m to 200m long are most commonly used, as anything longer becomes difficult to operate. Unlike a rubber hose, the transportation of abrasive mixtures such as sand, water, and clay, does not have a large impact on the inner lining of a TPU hose wall. The average service life of a flat hose is 3,500 cycles (10 years). Cycles consists of the installation, the pumping process, and subsequent dismantling.

To meet the often unique or challenging demands of a mining site, TPU hoses are also frequently made into custom sizes. A hose can also be manually adapted to work in a variety of environments.

All manipulations of a lay-flat hoses can be carried out in the field and do not require special qualifications of service personnel. Flat hoses are relatively light when compared to rubber hoses – running meter DN100 will be approximately 1.2 kg- which allows them to be installed manually, even with extended lengths.

Lay-flat hoses have the additional benefit of pairing with a variety of connecting elements, such as Camlocks, Storz, and fast removing couplings, that allow for efficient and safe assembly.

In some cases, both the rubber and TPU hose, have become a genuinely indispensable mining solution. The following are some examples of a situation in which a hose was the most viable and efficient option. 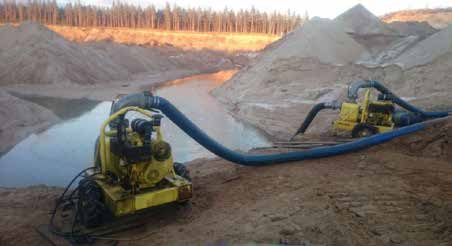 In practice, lay-flat hoses are used to solve several production tasks. For example, when panning for gold, a hose may be needed to provide a large amount of water to the washout machines located at the point of extraction. As the water intake point can be located at a considerable distance, building a stationary pipeline may not be a viable option. If the nearest water intake point is 7,000m away, the laying of a stationary steel pipeline could be subjected to unproved reserves and significant difficulties in its construction; a rugged terrain, or a height difference, which would lead to high financial costs and would take a considerable amount of time. The final decision to use a flat hose, such as the DN150, can be critical to a successful operation. 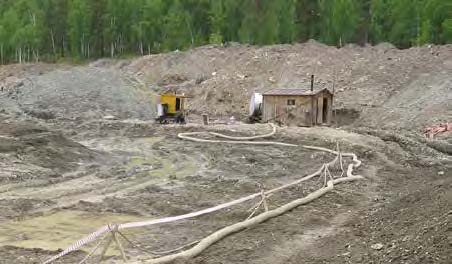 In coal mining enterprises, the mining process results in a deepening and expansion of the mining horizon, which inevitably leads to flooding of the quarry with groundwater that rapidly fills the cleared space. The occurrence of groundwater is a rather spontaneous phenomenon, and it is difficult to predict the behavior of the water in each situation. In these scenarios, the use of a steel or rubber pipeline is fraught with difficulties as they are very challenging to transfer from place to place. The use of flat hoses as bypass lines, instead, has led to an optimization of the groundwater pumping process and has accelerated the operation of the drainage system.

A diamond mining enterprise was forced to resort to lay-flat hoses for drainage from a rocky ledge. To lay a steel or plastic pipe system, the mining organization would have had to hire industrial climbers and attract lifting equipment, adding substantial financial costs to the operation. As a trial test, it was decided to try flat hoses DN300 PN10 in two lengths of 40m. The hose was specially made in red so that it could be easily identified on the ground. The hose was mounted on a high-strength nylon mesh, which eliminated the contact of the hose with the rough, sharp surfaces on the ledge, and facilitated its installation.

Next, the hose was connected to the pumping equipment and tests were carried out. One of the main tasks was to check whether the hose connection could withstand the weight of the water inside it. Subsequently, the polyurethane hose became the primary tool for carrying out this work. 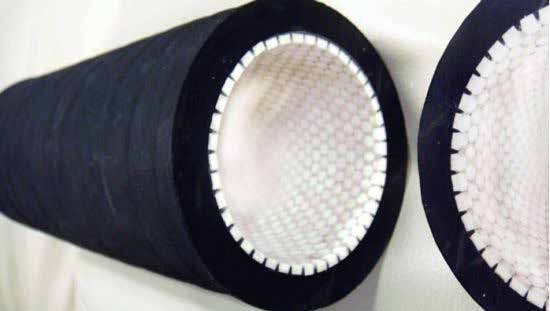 Hose with a ceramic inner layer.

The Necessity of Mining Hoses

Lay-flat hoses may not always be an adequate replacement for rubber slurry pipelines. In the shops of mining and processing plants, hoses can be installed at different angles (45-90°), which leads to the formation of polyurethane hose creases and will be significantly affected by the pumped product, which may be practically free of water. Sooner or later, a TPU hose used for this application would be out of service. Therefore, rubber hoses are used; the inner layer is made of mesh ceramics, which allows them to be used for many years.

Generally speaking, rubber hoses are used where a vacuum is needed. They are reinforced with a rigid steel helix cord, and the connectors are installed on the outer layer of the hose as opposed to inside. This eliminates the effect of the abrasive mixture on the steel elements of the connections.

As each mining enterprise has unique requirements, it is impossible to choose a universal solution that is used in all mining areas. It is therefore important that the design of mining and quarry systems utilize mining hoses in the initial phase of their plans, rather than simply keeping them as a failsafe for an emergency. 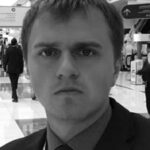 Jurij Artiukhov works as the General Manager at PipeTime, LLC. He previously worked as a Sales Manager for MTT Company and Project Manager for SOL SP Company. He holds a graduate degree from the University of Foreign Affairs, Economy and Law.