“Our strategic approach to succession planning allows our executives to build the experiences and skills necessary to continue the transformation of our company,” said Tom Williams, Chairman and Chief Executive Officer. “Rachid’s demonstrated operational leadership and international experiences with LORD Corporation, and more recently within Parker, will serve him well in this critical role leading our Engineered Materials Group.”

Bendali began his career in 1998 with LORD Corporation at its Erie, Pennsylvania location as an engineering co-op. Subsequently, he held roles of increasing responsibility in engineering, value stream, and product line management. In 2007, he was promoted to Business Unit Manager within LORD’s Erie operations. He then became Director, Aerospace Sales and Business Development for LORD, based in Geneva, Switzerland. In 2015, he became leader of the global Aerospace and Defense commercial function for LORD based in Cary, North Carolina and was later named Vice President with responsibility for Aerospace and Defense sales, marketing and programs.

After Parker acquired LORD Corporation and formed the Noise, Vibration and Harshness Division in 2019, Bendali was named General Manager of the newly formed division. In September 2021, he was named Vice President of Operations for the Engineered Materials Group with responsibility for multiple divisions.

Bendali holds a Bachelor of Science in Mechanical Engineering with a specialization in polymer engineering from the University of Akron. He also has a Master of Business Administration degree from the University of North Carolina. He is a Six-Sigma green belt. Bendali currently serves as a board member for Children’s Flight of Hope, a non-profit organization that provides air transportation for children and their families so that they can more easily access specialized medical care anywhere in the United States. 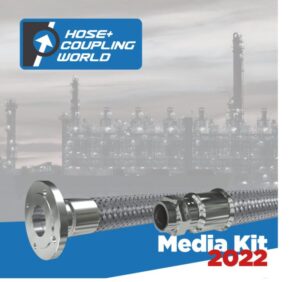 Hose + Coupling World produces print and online publications with the goal of building a global community of industrial hose and coupling producers, suppliers, and users. Our publications aim at providing the latest news, insights, innovations and networking opportunities for manufacturers, distributors, EPC (engineering, procurement and construction) contractors and end users.

By subscribing to the free Hose and Coupling World newsletter you gain free access to a snapshot of the latest tech-related developments in the hose and coupling industry sector – delivered straight to your email inbox.

To subscribe to it, please leave your details in the form.

ABOUT US
Hose + Coupling World is part of the KCI Group of Companies. We are a leading knowledge, communication, and information company connecting business-to-business professionals by building and sustaining global communities, solving their information needs and helping them to develop their professional life and friendships.
FOLLOW US
© Copyright 2022 - KCI Media Group - Hose and Coupling World
We use cookies on our website to give you the most relevant experience by remembering your preferences and repeat visits. By clicking “Accept All”, you consent to the use of ALL the cookies. However, you may visit "Cookie Settings" to provide a controlled consent.
Cookie SettingsAccept All
Manage consent