“Go, go, go, go!” rang the cheers from the small but vocal crowd of coaches, teammates, and international competitors; as each sled pushed off during the December 2021 North American Cup bobsled races in Lake Placid, NY. Amongst all the excitement was the debut of a lesser-known competitor ‘trying out’ for the USA Bobsled/Skeleton (USABS) Team, the Kuri Tec® Tundra Air® and Water Hose.

The North American Cup bobsled races serve as a primary qualifying event for USA Bobsled team members. The Tundra Hose’s participation resulted from Kuriyama’s sponsorship of the USABS, which began in April of 2021. The association was initially formed to help promote Kuriyama’s low temperature flexible hoses, such as the Kuri Tec Tundra Hose and the Tigerflex BW Hose, as well as the line of ‘cool running’ KuriCrimp Crimpers. As a non-profit organization that does not receive government funding, the USA Bobsled team relies mainly on such corporate sponsorships in order to reach its goals.

As the partnership continued to grow, it was determined there was a real opportunity to help upgrade the hoses being used by USABS to create and maintain the track. “Early in our conversations with the team it was mentioned the hoses being used were freezing up,” said Steve Frey, Kuri Tec Product Manager. “I advised that the Tundra hose was more application matched to their requirements than what they were using, and suggested they give it a try.”

Frey was put in contact with Lake Placid Facilities Superintendent John Napier to discuss whether the hose would be a good fit to help maintain the track. An experienced and successful bobsledder, Napier competed as a driver of both 2-man and 4-man bobsled teams at the 2010 Olympic Games in Vancouver, and now puts his bobsledding experiences to work maintaining the Lake Placid track. After some initial discussions, he agreed to try the hose, and a 3/4” ID x 100’ long hose sample was provided.

Built in 2000 for the Winter Goodwill Games, the Lake Placid track is one of two in the United States, and one of three in North America. It runs nearly a mile long, with up to 20 turns and a 420 ft overall vertical drop. Like most bobsled tracks, it is built upon a foundation of concrete, covered in ice. Throughout the foundation runs a series of piping, through which anhydrous ammonia is circulated, drawing heat away from the ice’s surface, keeping it cold. The ice layer is created by repeatedly spraying the track with thin layers of water until reaching the desired thickness, generally between two to six inches. During competition, the track routinely needs to be resprayed to replace the ice worn away by the sled’s stainless-steel runners, which chip away at the ice, at speeds up to 100 MPH.

Bobsled tracks create unique challenges for industrial hoses due to their length and steepness, as well as the frequency and degree of turns. This can require up to five people to carry up to 400 feet of hose, uphill through the long and winding track. The situation is further complicated should the hose experience a kink, requiring the entire crew to wait while a member runs the length of the hose to find and fix the kink. Given these challenges, the Lake Placid Ice crew is very selective regarding the products they use, thereby providing what would be a truly challenging test for the hose. 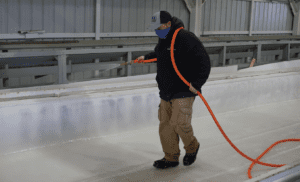 Despite these challenges, the hose was very well received by the Lake Placid ice crew. After using the hose to spray down the track in between competitions, they expressed extreme satisfaction with its performance, commenting not only on its flexibility but also its light weight, which is up to 40% less than that of similar rubber hoses. Napier was highly impressed with its resistance to kinking, which he tested by twisting up the hose while in use, despite which it continued to spray uninterruptedly.

The reason for the hose’s flexibility comes from its low temperature flexible PVC compounds, which were developed by their highly skilled engineering team to be tough and flexible at temperatures as low as -65˚F. Its superior physical properties and hose design enable it to outperform other PVC and rubber hoses, especially in cold weather. In addition, the PVC material is produced in-house, giving complete quality control oversight.

Another feature the crew appreciated was the non-marking, ‘safety orange’ color, making it more visible on the track, thereby reducing the potential for people to step on or trip over the hose. The team had initially been using a black, general purpose rubber hose, but had switched to a less visible white one as the black hose was leaving marks on the track.

The following day Napier provided a more in-depth tour of the facility, sharing some of his experiences with the sport. In addition to his bobsled team participation, Napier served a combat tour of duty in Afghanistan that same year. Today, he heads up the adaptive bobsledding program, empowering veterans to enjoy the experience of bobsledding, as well as heading up the youth bobsled development program. “I felt I owed it to my country to serve,” said Napier. “I am very thankful for the opportunities I have been given, and for the opportunity to give back.”

Napier sees potential for the newest addition to bobsled competition, the women’s monobob, in which a single person operates the sled, serving as both the driver and brakemen. The smaller sleds used in monobob are less expensive than some of the larger sleds, encouraging broader participation, which will help benefit the sport long term, “The future of the sport is all about increasing participation and awareness, so the more access we can give people to the sport, the more successful it will ultimately be.” Kuriyama, and its Tundra hose, look forward to doing their small part to contribute to that success for many years to come.

Tim O’Neill is the Marketing Manager for Kuriyama of America where he helps guide development and promotion of their broad range of industrial hose and fitting; including their Kuri Tec, Tigerflex, Alfagomma and KOA Couplings and Sanitary Couplings product lines. Prior to his current role Tim served as the Tigerflex Product Specialist for seven years. Also, prior to his time at Kuriyama Tim worked in marketing for various consumer products companies.