Hockey is a major sport – well, at least here in Canada. What you may not know, is that hoses and hockey have one thing in common: both involve lots of bending. A player needs to bend to drive the puck and, hopefully, that bending will lead to goals and cheers from the crowd; bending for hoses rarely gets any praise, but it sure can lead to failure if not properly done. Hoses can bend – they would not be of much use if they did not, but the questions worth asking are ‘how much’ and ‘under what circumstances’. If a hose is bent beyond a certain limit, even once, minor to severe consequences can ensue. In this article we are going to explore what is a minimum bend radius and what effect it has on hoses.

A hose normally consists of an inner tube, a reinforcement, and a cover. The inner tube is designed to offer low resistance to flow and remain flexible, fluid-compatible, and stable over the range of pressure and temperature of the application. The reinforcement is responsible for the pressure-retaining capacity of the hose. It accomplishes this by braiding or wrapping certain materials over the inner tube in various combinations and layers, depending upon the pressure requirements. Examples of reinforcement materials are fabric (Cotton, Rayon, Dacron, Polyester) and wire (Carbon or Stainless Steel).

Finally, the hose cover offers protection against environmental threats such as corrosion, abrasion, or UV damage. It does not add to the pressure retaining capacity of the hose. Figure 1a presents an example of these layers. Figure 1b shows how a failure caused by disregarding bend radius may look.

The way these hose components interact with each other affect how much bending a hose can take. Before moving to the topic of minimum bend radius, it is important to realize what the consequences could be of disregarding it. In 2003, the pilots of a plane departing from Brisbane (Australia) noticed an alarm regarding a pump in a hydraulic circuit and then a zero hydraulic pressure indication. The pressure loss affected several systems in the aircraft – roll spoilers, ground spoilers, parking brakes, nose wheel steering, and landing gear extension and retraction.

Despite the failure, the pilots were able to return to Brisbane and extend the landing gear by manual action.

The ensuing investigation traced the problem to the failure of a hydraulic hose. Components for aerospace applications have their life cycle carefully watched and the agency conducting the investigation found that the hose had failed at 12,369 cycles out of a 15,000-life limit.

The hose failed “by localized rupture at the point of swaged connection to an end fitting. Assembly diagrams showed that the hose failed at the point of maximum flexure when the landing gear was extended or retracted. Failure of the hose was attributed to the localized fatigue cracking and breakdown of the external braided hose reinforcing sheath and the subsequent rupture of the tubular core in the absence of the support afforded by the sheath. In-service flexures of the hose and pressure cycles and pulsations inherent in the operation of the aircraft’s hydraulic system were considered to be likely contributory factors.”

According to NAHAD (The Association for Hose and Accessories Distribution), the minimum bend radius is the radius “to which the hose can be bent in service without damage or appreciably shortening its life.” In static and dynamic applications, a hose bent to an excessive curvature may kink or flatten, sometimes even compromising the reinforcement layer. In dynamic applications, as seen in the aircraft incident described earlier, fatigue is also a possibility for hoses in bending.

Manufacturers specify what the minimum bend radius is for their hoses in each application. They are also responsible for informing how this radius must be measured. Figure 3 was taken from a catalog and shows that, for most hose types, the radius must be measured to the inside of the curvature while for metallic hoses the radius must be measured to the centerline. It is important to note that this example is not true in all cases. Always check with the manufacturer what the correct procedure is for measuring radius. The difference in length (centerline versus inside of the curvature) may look small, but it is critical in some cases.

The minimum bend radius is influenced by the construction characteristics of the hose. That is, the bend radius changes according to the materials selected for inner tube, reinforcement, and cover. Of all three, the reinforcement layer is commonly the one to add the most stiffness to the final assembly. Speaking of stiffness, it is important to remember that the force required to cause damage to a hose by bending can be sometimes quite low. “Many hoses, such as stainless-steel braided Teflon, can physically be bent past the minimum bend radius with ease, thus damaging or kinking the inner core of the hose. Hose bend radius can be exceeded if the incorrect length is established for the application, or during mishandling during packaging, shipping, or installation. Because of this, it is always important to examine your hose assembly for signs of over bending prior to installation and system startup.”

Once in possession of the minimum bend radius value, one can calculate the minimum hose length for a given angle of bend. A common formula used for this is:

Where: L is minimum length of hose required for the bend

A is angle of the bend

R is the MBR (Minimum Bend Radius) for the hose type and diameter considered.

Given the implications of excessive bending, it is only natural that standardized tests were developed to help in qualifying hoses. The ISO 10380, for example, has requirements for a bend test and a fatigue test for metallic hoses. Figure 5 shows the schematics of these tests.

The bend test is conducted without pressure and consists of bending a hose around a template with a radius dependent on the nominal diameter. There is a table in the standard with combinations of nominal diameter and bending radius for three different types of hoses. A cycle is defined as a bend followed by a return to a straight position and all hoses must complete 10 cycles with a test frequency of 5 to 25 cycles per minute (Figure 5a). After the test, the hose must be subjected to the leak test, when no visible leakage, and no other failure.

As an example, to make a 90° bend with a hose whose MBR is 4.5 inches: L= 90/360 x 2 x 3.14 x 4.5 = 7 inches In this case, 7 inches is the minimum length to afford the hose a 90° bend without damaging it. It is worth mentioning that such bend should take place over the entire minimum length of the hose, and not a portion of it. Also, the formula does not mean that 7 inches will be long enough to meet application needs – it is necessary to add straight sections and fittings as well. It only means that if the 90° bend takes place in less than 7 inches, the hose could be damaged. In Figure 4, the yellow section of the hose has a length of 7 inches that must be added to a straight section of 2.3 inches to reach the final required length. Finally, the formula we just used is a general one and must not employed without the approval of the hose manufacturer. Depending on the application and the manufacturer, different formulas may be required.

For the fatigue test, the hose is filled with water and pressurized with the highest permissible pressure of that particular hose model. The hose is arranged in such a way that it forms a vertical U-bend, as shown in Figure 5b. The distance between the axis of the connecting parts must correspond to twice the bending radius defined in a table (which relates radius and nominal diameter). The hose is then subjected to repeated bends with a frequency of 5 to 30 cycles per minute in a direction parallel to the axis of the hose. The hose is expected to endure a total of 10,000 load cycles. The test is interrupted in case of leakage or if other types of failure occur. 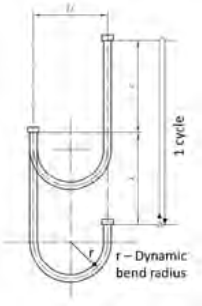 The ISO 10380 is concerned with metallic hoses, but other standards also have bending requirements for non-metallic hoses. The BSRIA BG 4/2004,5 for example, states that, “When bent to the minimum radius, the internal diameter of the unpressurised hose shall not reduce by more than 10%. This shall be confirmed by the free passage of a ballbearing of diameter equal to 90% °æ 1% of the nominal internal diameter of the hose.”

Also, according to the BSRIA standard, a fatigue test must be conducted after a period of accelerated aging. “Hoses shall be bent 10 times to the declared minimum bend radius (rotating 180°∆ after each bend) then pressure tested. There shall be no visible leakage from any part of the hose assembly when held at 20 bar for five minutes.”

In order to mitigate the risk of operator injury or hose failure, it is essential that operators take the time to ensure that a hose is not bent beyond a certain limit. By following the established standards, following testing procedures, and conferring with the hose manufacturers about the minimum bend radius, the life of a hose can be extended.