In the industrial gas market, there are a variety of hoses used in services that range from -452˚F and a few psi, to 100˚F and 6,000 psi. Proper inspection and testing of these hoses is necessary to maintain the reliability and safety of the operation. There are a number of inspection and testing frequencies possible, and each hose type/service condition will assist in defining this frequency. Daily use hoses may require more frequent inspection, and if it is in more severe service, that may further shrink the inspection interval. It is therefore pertinent to review the variations between different types of hoses.

Large diameter transfer hoses, commonly used to fill transports and storage tanks at customer sites, regularly see cryogenic temperatures of -320˚F and occasional service temperatures of -450 ˚F in hydrogen and helium applications. As the pressures encountered in these hoses can range between 250-350 PSI, the most critical part of the hose assembly is the coupling; it is a large brass hammer union-style connection.

Since the coupling connection for transfer hoses is made and broken many times a day, the risk of potential grit and other contaminants entering the sealing surface is significantly heightened. If a coupling is hammered closed with any significant debris on the seat, the connection could suffer damage on the hose side as well as the other side, of both tank and transport applications. The inspection of these connections is largely visual and special attention is given to nicks, dents, and major deformation. Virtually all of these hoses are armored, and this armor should be visually inspected for gaps, breaks, and separation, especially in the coupling area.

Finally, any leakage of the hose while in use should be noted as evidenced by leakage through the armor. This type of hose and coupling can generally be tested, with a simple leak or pressure test, depending on the gas service and overall cost of the hose. It is not typical to put together a test program and individually test hoses at a cost of USD $300-$400 for a hose that only costs USD $1,000 to replace.

The second main category of hose in the industrial gas market is the small diameter, low pressure, cryogenic hoses. Similar to the large diameter hoses, these have industry-specific coupling styles and are subject to the same sort of handling damage. Seating surfaces should be visually inspected for damage, and if the connection leaks when fully tightened, the hose should be repaired or replaced. Cryogenic hoses can have several layers of construction, and often include a corrugated stainless inner and either a braided cover or a full armored sheath. Inspection of these elements is again, performed visually. The inspector should examine the braid for loose or detached wires. If armored, the inspector will look for any separation of the spiral-wound jacket. In much the same fashion as the large-diameter hose, replacement cost should be considered to determine if a true scheduled testing program should be implemented, or if it is more efficient to follow a ‘discard-when-broken’ plan. 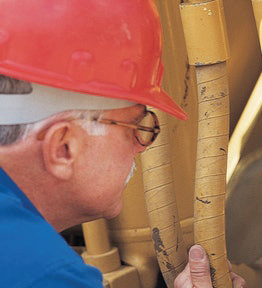 The final category of industrial gas hose are high-pressure (HP) designs, which are generally used on compressed cylinders or connections between components of a liquid system that operate at several hundred PSI. As there is a great deal of energy stored in a hose/piping system of this sort, the safety requirements are accordingly greater. In addition to the standard visual inspection, a testing program is a necessary component to ensure suitability for a given set of service conditions. There are two categories of HP hose: small diameter and large diameter. The small diameter hoses are generally fabricated with 1/4” or 3/16” ID heavy walled PTFE tubing and have a tight braid stainless wire cover. It is especially important to visually inspect small diameter hoses, as they are frequently bent beyond the minimum radius, which kinks the inner tube significantly and causes a weak point. The length of the hose should therefore be checked for any bulges or sharp kinks, as well as for any damage to the stainless braid. There are a wide variety of couplings available on these hoses, and as always, visual inspection for nicks and deformation on any threads and seating surfaces should be performed before any use.

Large diameter hoses that operate at high pressure are generally more appropriate for an in-depth testing program, as they are quite expensive, and any defect can release potentially deadly levels of energy. A test program has several elements, and each must be managed appropriately. One key element to ensure success is documentation of the testing program, including: test methodology, labeling, retest frequency, and tracking. For example, each hose is expected to have a unique tag that coincides with relevant details that have been entered in the documentation or hose ID matrix. This can include: the connection/coupling type, length, diameter, MAWP, test intervals, whether the test will be pneumatic or hydraulic, and materials of construction.

It is also recommended that each test follow detailed procedure(s), and that a process be followed when assigning new hoses to a particular test method. Test methods should be selected based on the predicted service of the hose, and whether moisture can be used for test fluid. Generally, hydrostatic testing pressure is 1.5 X MAWP of the hose, while pneumatic achieve 110%, with appropriate safety devices. Once all of the documentation is in order, the hose needs to be marked with MAWP and the last date tested.

Of course, the type of service in which the hose is being used should be considered when developing the program, but the condition in which high-pressure hoses are typically used generally makes implementing a detailed testing regime an easy decision. As for inspection, HP hoses should be visually inspected before each use, especially if it is in a frequent connect/disconnect service condition. A checklist for the inspection should include the coupling area, as well as the length of the hose. This inspection should also cover a detailed examination of critical failure points on the hose, such as kinks, thread damage, permanent bends/deformities, and any other mechanical issues that could affect the integrity of the hose.

As can be seen by the examples above, perhaps the most important part of a testing and/or inspection program is an evaluation of the hoses in question. It is in the best interest of the operator for each hose to be assigned to a test or inspection category. The hoses which have greater inherent risk factors, have the greatest potential to benefit from a full test program. Generally, most of the low-pressure hoses that are used in the industrial gas industry will be on the simple replacement plan, with relatively few hoses in high-pressure service requiring a more detailed test and inspection regiment. 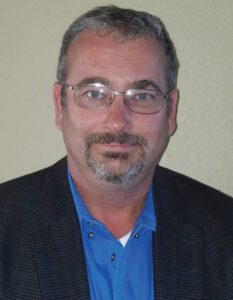 Fred Schweighardt is a National Project Leader and International Expert for Airgas, an Air Liquide Company in Houston, Texas. In this capacity, he is applying his extensive background in welding to the fields of industrial gas in fabricating and manufacturing. Prior to joining Air Liquide, he was employed as a pipe welder, heating plant engineer, and weld shop man ager. Fred is the Chairman of the AWS A5S (shielding gas) committee and is also a voting member of ISO US TAG 44. Fred graduated from the University of Utah with a BS in Welding Engineering Technology, and is an AWS Certified Welding Inspector.