In our special topic article, Jurij Artiukhov speaks about hoses and its long distance usage to remedy a power failure, its general effectiveness in power generation and bunkering, and how the shipping industry has whole-heartedly accepted flexible pipeline technology.

As with many other industrial branches in the modern world, the marine branch is moving forward with new technological advancements. Tasks which were considered hard or even impossible earlier are now solved successfully.

For remote cities in the far north, an uninterrupted supply of fuel for diesel power plants is very important because not only do the industry machines used for mining activities need to work perfectly, but also the day-to-day prosperity of the people in the area is of high importance. Basic necessities like lighting and heating are all bound by energy that is generated at the power station. The stations themselves have no source of power except supply fuel. Because of this, in the last few years there has been a growing trend to use flexible pipeline system—which is based on polymeric lay-flat hoses.

Most times, vessels cannot get close to shorelines due to shale waters or other obstacles, so transferring diesel can only be done distantly. Vessel crew deploy floating hose line from ship to shore – as a rule, to the closest oil depository and to its oil tanks or other reservoir. In cases like that, the usage of hoses is effective not only in bunkering, but in power generation overall.

For example, flexible pipelines—like DN50-DN150—are used to drain the waste of petrochemicals from transformers and supply diesel to distant power stations with a lot of technogenic or natural obstacles.

These days, there is power generation availability through mobile gas-turbine stations. One of the shining examples of the usage of such a station is when in the Crimean peninsula they had an incident or a ‘black-out’, during which there was a total collapse of electricity for all users on the peninsula.

To remedy this situation gas-turbine mobile station was supplied—but none could work on its own. So, hoses were provided to aid the uninterrupted supply of the diesel for the stations. Lines several kilometers long were deployed not only in the plains, but also in the rocky areas. Hoses solved that task perfectly and are still operating. Several Crimean cities still use the energy provided by these gas turbine stations.

With bunkering, it’s important to talk about the experience of a marine company, which annually provided distant gold mining with fuel for industry machines. In this case, it was not realistic to come close to the shores of Kamchatka (Siberia) due to the drop in the depth, so a floating flexible pipeline DN100 PN16 (2,000 meters length) was deployed. The fuel transferring was further complicated by harsh weather conditions – strong winds, cold temperature and a storm. Within 2.5 hours flexible pipeline were installed and switched to the reservoir on the shore.

During the process, it took nearly 13 hours to deliver the fuel from the ship to the shore and on many occasions the hoses were severely curved with an ice floe, yet no failures were observed. This was due to the thermoplastic polyurethane (TPU) — a basic material for flexible pipelines—which has an increased abrasive resistance. 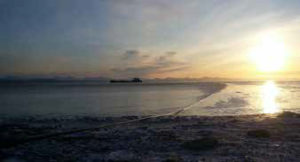 Spooling devices and distant use

In the future, to increase the efficiency of the transferring process, a special winding (spooling devices) should be implemented and situated on the shore.

Spooling devices are equipped with diesel engine and one reel can hold up to 1000m of flexible pipeline. The removal of the reel can be done with a cross arm, and new technological solutions like manual removal (with installed hoses) is possible as the weight of reel with the hoses is 1600ks (the weight of one meter of pipe is 1.4 kgs and the weight of the reel is 200kg).

Hoses are not just used by commercial and industrial professionals but also by governmental entities like the defense ministry. A special complex called the ‘offshore complex for shipping fuel’ (OCSF) contains a spooling devise for flexible pipeline, compressor, hoist and other additional equipment. The volume of the flexible pipeline, DN100 PN16, in the complex is 1,000-1,200 meters. DN100 PN16 – the ‘top seller’ in diameter for the bunkering branch—along with pumps on the ship could provide six bars pressure and this diameter provides the exact flow capacity maximally. OCSF could be used then by the navy ship needs to supply the fuel from ship to shore without coming close to the shoreline. Without appearing closer to the shore, vessels can be fueled directly from there. The Complex is equipped with everything for pressure testing –like compressor, special signal floats—so the hoses can be recognized even during a storm. 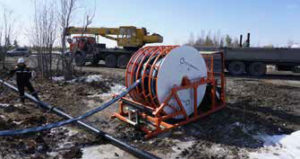 The special system of pigging cleaning allows cleaning flexible pipeline from the remains of the fuel/s and helps spool the hose up to the ship without any spills and damage to the environment.

The most commonly used couplings for the DN100 PN16 are the special fast removing couplings (FRC) with a clamp, but the well-known CAMLOCKS from USA can also be installed for usage. This flexible pipeline system is used for ship-to-ship fuel transferring, in which case it’s recommended to use special hangers for hoses. This ‘hangers’ technology was originally invented and patented in Canada. 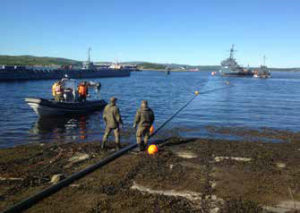 Shipyards companies now prefer to replace the standard rubber hoses to flexible pipelines made of TPU. Foremost, the coil of the rubber hose DN50 PN16 with a 25m length and a near 2m diameter take a lot of place on the vessel and it’s important to consider the fact that it’s necessary to have at least several different hoses for different types of liquids (potable water, diesel, waste waters, etc). The coil of flexible pipeline DN50 PN16 with a length 25m has 0.5m diameter reduces the storage area. Leading engineering institutes for ship construction, have prescribed and confirmed in design documentation the usage of flexible pipeline systems.

Moreover, many civil and navy ships are already equipped with the flexible pipelines, some of whom use flexible pipelines as a substitute for traditional fire hoses. Based on these examples it is fair to say that the technology of flexible pipelines has made its way into the shipping branch—which is closely tied with bunkering and power generation. Due to its characteristics, flexible pipeline systems have increased oil resistance, does not interact with pumping fluid and is totally resistible to UV and salty sea water.

Hoses systems are certified and approved by marine and river shipping register (Russian analogue of Lloyd’s Register), which makes them legitimate for usage in bunkering and shipyard.