Hydrogen is expected to play a significant part in the low-carbon future that lies ahead, and hoses are a critical part of the delivery system. For this application, hoses must abide to pressures higher than 350 bar with materials that will not be adversely affected by hydrogen. Hose design requires two types of materials; metallic materials to deal with high pressure, and non-metallic materials for flow conduction. However, hydrogen poses a unique challenge in material selection for hoses. Due to its small size, hydrogen can diffuse into metallic and non-metallic components and, once there, can interact in deleterious, not-yet-fully-understood, ways with the materials’ internal structure. Read on to learn more about hydrogen and its related damage mechanisms in common hose materials. 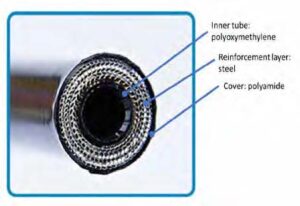 Hydrogen is the simplest, lightest, and most abundant element in the universe. As a replacement for fossil fuels, research has been focused on its use associated with fuel cells – a battery-like device that, when fed with hydrogen, produces electricity with only water and heat as by-products. “The energy in 2.2 pounds (1 kilogram) of hydrogen gas is about the same as the energy in 1 gallon (6.2 pounds, 2.8 kilograms) of gasoline.”1

A hose assembly for hydrogen delivery resembles a fire hose more than a conventional gasoline fueling one. Hoses for hydrogen are thicker, heavier, and use a nozzle with some sort of locking mechanism; and the reason for this is pressure.

Hoses for gasoline or diesel delivery are rated for a maximum of 10 bar. When they attached to the tank, they convey a liquid much in the way one would pour a glass of water from a jar – if distracted, it can overflow and cause a spillage. In contrast, hydrogen hoses operate with a gas and under much higher pressures – 350 bar for buses (and other heavy-duty applications) up to 700 bar for light vehicles. In order to accommodate these pressures, the hose requires extensive reinforcement layers; and that is why it is heavier and thicker (see Figure 1).

Figure 1 shows that a typical hose for hydrogen delivery is composed by metallic and non-metallic parts. When exposed to hydrogen in high pressures, polymers and elastomers are affected in different ways than metals. Remember the statement about 1 kilogram of hydrogen gas having the equivalent energy of 1 gallon (2.8 kilograms) of gasoline? Well, this is true, but there is a catch. The 2.8 kilograms of gasoline exist inside the car fuel tank at atmospheric pressure. However, compacting enough hydrogen gas to reach 1 kilogram requires pressure, way more pressure. Today, tanks operate with either 350 bar for buses (and other heavy-duty applications) or 700 bar for light vehicles.

Designing safe procedures and equipment to deal with hydrogen in such pressures is no easy task. Being so small, hydrogen can migrate through materials and interact with them in ways leading to failure – sometimes unannounced, catastrophic failure. The next section deals with such mechanisms in metallic and non-metallic materials.

Whenever one thinks of hydrogen and metals, one often thinks of hydrogen embrittlement. However, the ASM handbook cautions us that hydrogen embrittlement is just a type of a broader category of hydrogen damage mechanisms.2 When failure is associated with reduced load-carrying capability or fracture below the yield strength, that is hydrogen embrittlement. Other failure modes associated with hydrogen damage are: cracking, blistering, hydride formation, and loss in tensile ductility.2 When considering alloys for hydrogen service, the designer has to keep in mind that “mechanical, environmental, and materials variables that generally contribute to hydrogen-assisted fracture include loading mode (e.g., static vs cyclic stress), hydrogen gas pressure, temperature and material strength level.”3

The hydrogen supply-chain requires materials for production, transport, storage, and end user operation. As such, hydrogen is stored either as a compressed or as a refrigerated liquefied gas. The former, requires tanks with pressure-capacity in the range of 5000–10,000 psi (350-700 bar). In the latter case, tanks able to withstand temperatures below -252.8°C (-423,04°F or 20,35 K, the boiling point of hydrogen at one atmosphere pressure). Hydrogen affects these two conditions in different ways. 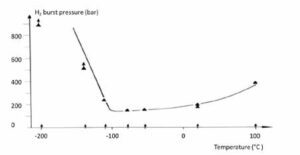 Ductility is a mechanical property related to a material’s amenability to deformation; that is, how much it can be plastically deformed without fracture. As temperature drops, metal alloys that are ductile may become brittle, such as many carbon steels and ferritic and martensitic stainless steels. On the other hand, copper, aluminum, nickel, and austenitic stainless steels remain ductile even at cryogenic temperatures. The behavior for a specific alloy will depend on several factors; for example, crystalline structure, grain size, the propensity to absorb contaminants, and heat treatments. When adding hydrogen to this low temperature environment, evidence suggests that hydrogen-assisted damage can be neglected below -150°C, at least for some of the commonly used austenitic steels for hydrogen storage (see Figure 2). That leaves the designer with one less challenge; only the normal considerations of dealing with mechanical characteristics, expansion and contractions phenomena and the thermal conduction of the various materials.4

High-pressure gas storage at regular ambient temperatures is a whole other situation. Here hydrogen-assisted failure is a very real possibility. The worst offender is hydrogen embrittlement, which is still not a complete understanding of the mechanisms leading to failure. Basically, it is believed that either hydrogen atoms diffuse through the metal and recombine into molecules with higher volume, increasing pressure from within the crystalline structure of the metal; or hydrogen reacts with some constituent of the metal and forms brittle components more prone to initiate cracks (see Figure 3). In both cases, loss of ductility and crack initiation may lead to catastrophic failure given temperature and load conditions.

The inner tube and cover of the hose in Figure 1 were made from polymers classified as semi crystalline thermo-plastics (polyoxymethylene – or POM – and polyamide). The inner structure of these polymers has both a crystalline (ordered) phase consisting of aligned chains packed into lamellae, and an amorphous (disordered) phase. Examples of other semi crystalline thermo-plastics are: high density polyethylene (HDPE), polychlorotrifluoroethylene (PCTFE), polypropylene (PP), and polytetrafluoroethylene (PTFE).

“The properties of polymers depend not only on their chemical structure, by which they are typically designated, but on a variety of other factors. The most important of these are molecular weight (and molecular weight distribution) of polymer chains, and processing history. For example, the degree of crystallinity of a polymer is affected by the rate at which it is cooled from the molten state. Processing techniques like extrusion can induce orientation and extension of polymer chains, influencing properties. Fillers, plasticizers, crosslinking agents, and other additives are often incorporated to modify properties. Thus, tremendous variety may be associated with a single polymer.”7

“Polymers are not subject to hydrogen embrittlement in the same ways as metals. Hydrogen absorbed by polymers exists as a diatomic molecule; it does not dissociate as it is known to do in metals. The fact that it remains chemically intact does not necessarily imply that hydrogen does not influence polymer properties. Some gases, notably carbon dioxide, become strong solvents for many polymers at high pressure and have a plasticizing effect on properties (i.e., the materials become significantly softer). Hydrogen is expected to be inert in the presence of most polymers, but its effects have rarely been explored at high pressures.”7

When selecting non-metallic materials for hydrogen service, the technician faces at least two more challenges than with metallic alloys:
• Variation on mechanical and chemical properties – Bodies such as ASTM and ASME define composition, heat treatment, and properties for metal alloys with very stringent rules. Polymers and elastomers, on the other hand, do not have yet the same degree of standardization; for the same polymer grade, properties on finished pieces may differ due
to additives or how exactly the chips or pellets of the original polymer were processed into the manufactured part.
• Understanding of degradation mechanisms – The detrimental effect of hydrogen in steels was first reported in 1875.8 From then on, a steady stream of research added on the subject and formed a robust body of knowledge on what works and what does not when dealing with hydrogen. Sadly, non-metallic materials are not in the same position. Much remains to be researched in terms of degradation mechanisms, physical stability, permeation properties, friction and wear, fracture, fatigue, and rapid cycling effects (this is particularly important in refueling stations where materials are exposed to large pressure gradients during operation).

The SANDIA report previously mentioned6 also contributes to closing the knowledge gap on non-metallic materials. However, it does so by limiting itself to data on gas permeation; in other words, simply providing a summary of hydrogen transport data in common polymer materials. The reason for the limited scope is as follows: “We are unaware of hydrogen compatibility studies for common polymer materials that might be expected in gaseous hydrogen service, thus we have eliminated the sections on mechanical properties and microstructural considerations.”6

This lack of knowledge drives many conservative maintenance procedures, such as replacing hoses on a fixed schedule for lack of inspection tools or ability to predict future performance. For hoses and other equipment, it is also important to mention that non-metallic materials also include lubricants and other fluids that might be involved in operation or maintenance. They too require assessment regarding compatibility with hydrogen service.

Countries around the world have pledged to reach net-zero emissions by 2050. Hydrogen is a critical part of this goal, due to its abundance and clean-burning characteristics. However, integrating hydrogen safely in our energy matrix will require further research into materials, as there are still doubts about potential incompatibility, especially for polymers in high pressure applications.